Sadly we didn’t take part in the celebrations. We stayed in a nice hotel on New Year’s Eve but we were exhausted and I felt sick. We were the only guests there, so understandably the staff didn’t want to open up their whole kitchen just for us. We had a decent(nice) meal but it wasn’t anything spectacular(special), and had a few beers but I felt so sick and sleepy that I immediately went to bed. The next day we drove south to the Kenyan border and were forced to spend an extra day by the border post in a small settlement because the authorities who worked at the border didn’t bother(didn’t take the trouble) showing up to work because of the celebrations. We were told that technically they were supposed to work every day, but we were the only travelers that day and... well to be honest I wouldn’t want to interrupt my New Year’s celebrations for a couple of insignificant(not important) travelers either. We stayed the night at a decent enough “hotel” (I wouldn’t really call it as such but I can’t find another name for it) which had an outside restaurant seating area and there were many families gathered(met) that night for drinks and food, and we were lucky to have dined in a truly Ethiopian manner(way) just one last time before crossing into another country, because Ethiopian food is absolutely divine(great)! Injera alone is downright(absolutely) addictive, and all the toppings and stews it gets served with are mind-blowing and delicious as well. My companion and I are both vegan, and Ethiopian cuisine offers a lot of option for vegans because every restaurant has a fasting menu, so we fattened up a bit on injera and the wonderful local beer.

Although I have spent the majority of my life living in “Western” countries and celebrating Christmas with my family on December 25, I was born in Russia, where Christmas is celebrated on a different date. January 6 is Christmas Eve, which is when devout(religious) families attend long services at their local churches, and then on Christmas Day there is usually a large feast(a lot of food) to be shared among family members and sometimes close friends too.

There are numerous traditions that people follow on Christmas in Russia, some of which are completely secular(světský) and even pagan(pohanský). When I was a child and growing up in the 90s, it was common to try out witchcraft on Christmas Eve. Some of these activities included using cards or cups to predict the future, but my favorite was burning paper on a metal tray and then looking at the ash’s shadow on the wall in candlelight to determine what shape it took: if it was a negative or sombre(dark) shape, like a bat or a wolf, then bad luck was in store for the one who burned the paper. Another one was writing and cutting out different boys’ names from a sheet of paper, placing all the names under the pillow, and then in the morning picking one out blindly to determine the name of their future husband.

Food on Christmas Eve and Christmas Day is also very traditional and heavy, with many salads doused(utopený) in mayonnaise, savory(tasty) meat and fish jelly dishes, caviar, pickled(nakládaný) and marinated mushrooms, tomatoes, cucumbers and even carrots, and many others. Of course, alcohol is consumed in rather large amounts by adults and sometimes by children in secret, although nowadays the government is taking drastic measures to reduce alcoholism and dissuade(put off) young people from drinking heavily. During Christmas Day there are often children’s fairytales and other winter-themed films and shows on TV. Due to the weather usually being terrible, between the beginning of spring and the bitterness of winter, few people actually venture(try to go) outside, unless they live in the countryside or spend Christmas there. 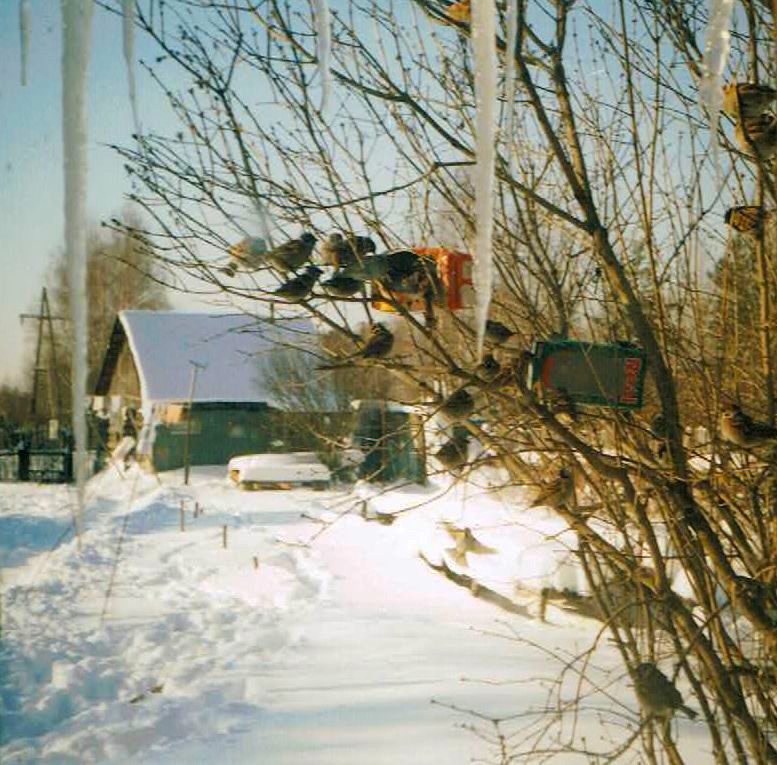 When I still lived in Russia, my family and I sometimes spent Christmas at my grandparents’ house, which was on the outskirts(suburbs) of a small village, 2-3 hours away by car from my home city. They lived in the middle of nowhere, on the edge(margin) of a forest, between a big empty road, a pond(rybník), and neighboring houses which were far enough that you couldn’t hear the people living there. My grandparents always placed a beautiful Christmas tree outside their small hut-like self-built house, right next to the living room’s windows, so even if we spent all night inside, we could still marvel(wonder) at the beauty of the tree. They had a piece of land in front of the house where they grew vegetables in the summer, and it was always completely covered by a thick layer of puffy(nadýchaný) white snow in winter. It was fun to play and roll around in it, wrestling with the dog or building a snowman. Usually the temperatures dropped pretty low at night, so we used to spend evenings and nights by the fire after getting completely soaked in the snow. We would drink hot tea with honey and homemade jam or eat my grandma’s incredible pies, watch TV or talk, our faces glowing red from the cold wind and the fire. The only sounds outside would be the wind and the dog howling(vyjící) once in a while, answering the distant wolves that lived in the forest nearby and came into the village on particularly long and starving winters.